Many Genshin Impact 2.6 gameplay leaks have surfaced online, with many of them featuring Kamisato Ayato.

Previously, Travelers could only rely on text leaks (some of which were rather dubious). Those leaks weren’t the most specific, which makes today’s abundance of gameplay leaks feel so refreshing.

As of right now, virtually everything has been leaked about Kamisato Ayato, ranging from his Ascension Materials to his abilities. There are also specific numbers regarding his kit, but that’s usually one of the first things changed from the beta to the final release.

This article will focus on the elements that are unlikely to change.

This video showcases his Elemental Skill. It essentially does the following:

One good aspect of this Genshin Impact 2.6 leak is that it shows travelers how easy it is for Ayato to hit enemies while this Elemental Skill is active. The range is generous, although it only lasts for six seconds at the moment.

Here is another gameplay video that showcases some of his Vaporize potential. In this case, ICD stands for “Internal Cooldown.” Based on this Tweet, it would appear that his ability to apply the Hydro element on an enemy through his Elemental Skill can happen approximately once every 2~2.5 seconds.

Many Genshin Impact fans compare his Elemental Burst to Ganyu’s, except as a Hydro variation. Both are circular AOEs that deal damage with a duration of 15 seconds. However, Ayato’s Elemental Burst has some differences.

The specific numbers for damage, cooldown, and Energy cost are all different between the two Elemental Bursts. Ayato’s allies also gain an ATK Speed buff while in the Elemental Burst area. 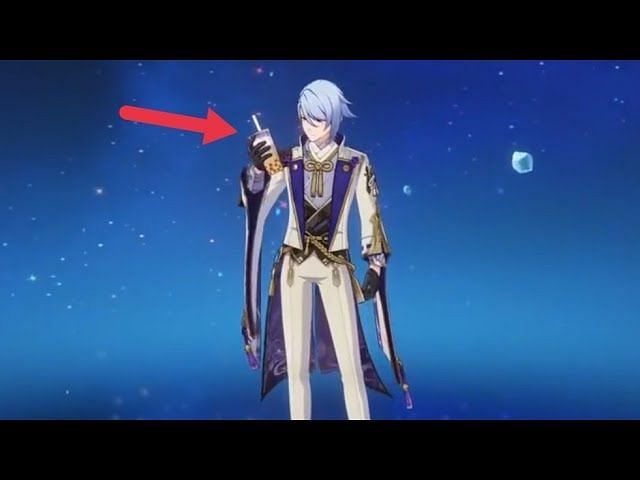 Normally, idle animations are generic or add a little bit of oomph to a character in Genshin Impact. His second idle animation involves him drinking boba, which begs whether or not he stores it in his sleeve as he fights foes.

Passive 1- pressing E gives +2 levels to Flash Wave. When a clone gets exploded from any attack. Flash Wave gets the max level.
Passive 2 – the damage of his burst increases by 3% of Ayato’s max HP.
Passive 3 – 18% higher chance to cook an additional spooky dish.

#Ayato passivesPassive 1- pressing E gives +2 levels to Flash Wave. When a clone gets exploded from any attack. Flash Wave gets the max level.Passive 2 – the damage of his burst increases by 3% of Ayato’s max HP.Passive 3 – 18% higher chance to cook an additional spooky dish.

The above tweet summarizes his three Passives in Genshin Impact (based on current leaks). It’s worth noting that “E” refers to his Elemental Skill, and the “spooky dish” refers to a Suspicious Dish in addition to whatever he cooked.

Ayato’s constellations!
(Thank you server members for this translation!)

His Constellations have also been a part of the latest Genshin Impact 2.6 leaks. The above tweet is a concise summary of what each Constellation does, although it is worth noting that everything is subject to change.

For example, Yae Miko had some noticeable changes in her beta regarding her Constellations.

The above infographic displays all relevant information regarding what Ayato needs to ascend or max out his Talents in Genshin Impact. These materials are currently obtainable in Genshin Impact 2.5, so players can pre-farm everything right now.

Q. Would you whale for Ayato?

Russian figure skater Kamila Valieva, 15, claims a positive drug test at the Winter Olympics was caused by her grandfather taking the drug

Callum Smith: I Do not Assume Plant Has The Energy To Get Canelo’s Respect

From glam companions to flash watches, well-known brothers and personal jets… however comes out on prime?

“I was looking for my missus, honestly”